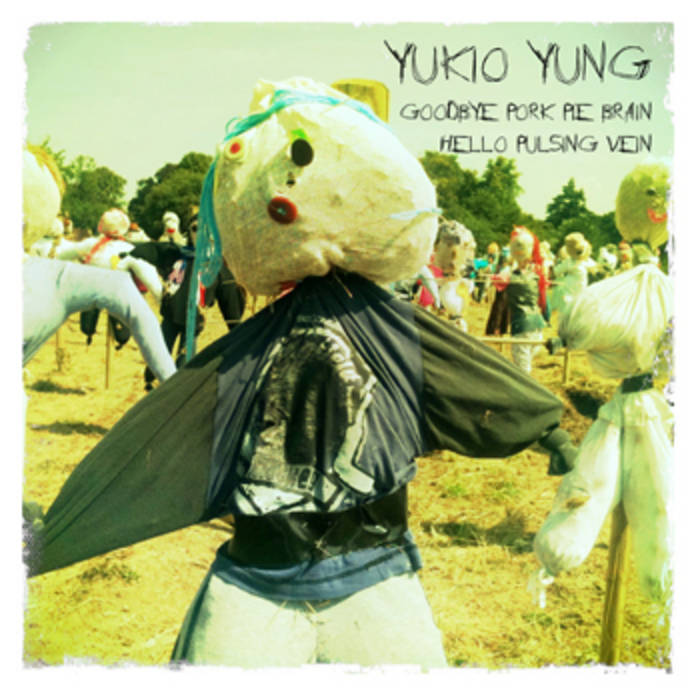 "GOODBYE PORK PIE BRAIN/HELLO PULSING VEIN" is compiled from three releases in the late 1990s for the German JAR Music label. Tracks 1 to 5 are from "Goodbye Pork Pie Brain", a 10-inch mini-album on yellow vinyl; tracks 6 and 7 were a CD single; tracks 8 to 16 were from "Hello Pulsing Vein", a 10-inch mini album on orange vinyl.

CD VERSION AVAILABLE AT THE END OF NOVEMBER.

"After the demise of the curious British art-pop "experience" The Chrysanthemums (at least in its first guise), the band's singer, multi-instrumentalist Yukio Yung (Terry Burrows), embarked on a period of prolific solo activity, numerous releases appearing on a variety record labels in Germany, where the band had been most popular.

"Goodbye Pork Pie Brain" emerged as a 10-inch mini LP pressed in bright yellow vinyl. Whilst the tunesmithery that made The Chrysanthemums so appealing is still in tact, most noticeable is an upscale shift in production—Yung's previous solo efforts were home recorded and sometimes marred by a reliance on electronic drum sounds. Whilst he still plays nearly all of the instruments, the solid drumming of Andy Ward from The Bevis Frond creates the kind of band feel that The Chrysanthemums never achieved on record. Also on board here is Yung's sometime collaborator Todd Dillingham (whose own work charts related territory—albeit perhaps pointing toward an earlier era). Very much a record of two halves, the chirpy pop songs of side 1 (including the very ELO-play-late-Beatles of "Fizzing Out") provide a stark contrast to the 16-minute epic that takes up the whole of the flip side, "Yuri Gagarin"—imagine a Krautrock-heavy Stereolab and that might give you an idea of the sound. The "song" part, which only comes in about five minutes from the end, seems to be told as a series of flashbacks in the tortured mind of the great cosmonaut, who reveals that wherever he finds himself in the world he'll really always be "a million miles away." For a slab of space rock it's strangely moving!

Around the same time, JAR released Yung's most radio-friendly single. "Mostly Water", with its thumpy piano, irresistible melody, oblique lyrics, and unexpected "noises", condenses many of the essential Yung elements—cute pop songs with unusual sounds within one track. (Remember that under his given name, Terry Burrows, he also recorded industrial abstract works with leading avant garde German composer Asmus Tietchens.)

Whether through a lack of focus or interest, or a sometimes alienating tendency toward obscure intellectualism, Yung and The Chrysanthemums have remained cult curiosities, loved by those who know their work—as relatively small as that population might be.

Burrows has since largely concentrated on an adjacent career as a prolific and successful author, and most of his musical activities have since shifted back toward abstract experimentalism. Although his pop sensibilities did resurface briefly in 2006 with a delightful collaboration with "godfather of home recording" R. Stevie Moore—"Yung & Moore Versus The Whole Goddam Stinking World". For a discerning few, it was one of the releases of that year." SINGLE LINE, 2007.

Guest hosted by Tamar Osbourn aka Collocutor and Toshio Matsuura.