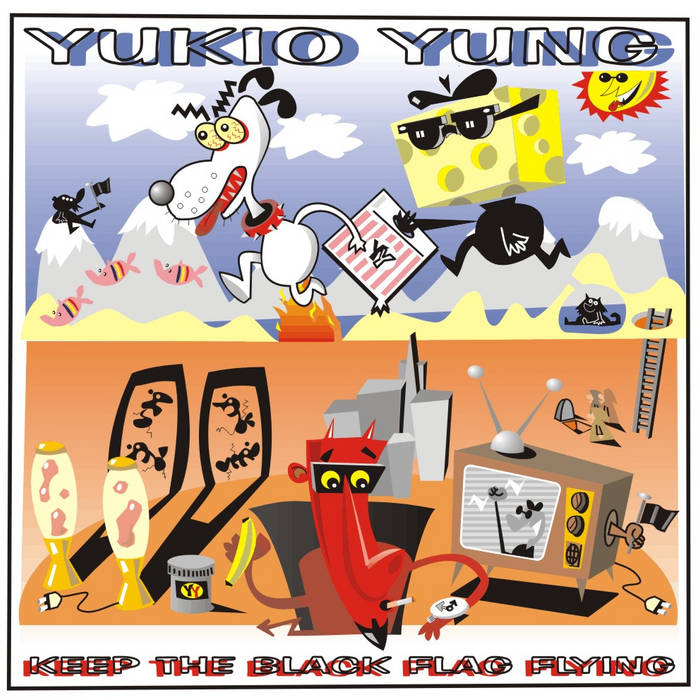 Digital reissue of the first single by Yukio Yung [Terry Burrows], originally released in 1995 on 7-inch yellow vinyl by the JAR label of Germany. The lead track – 'Keep The Black Flag Flying' - was a lyrical rewrite of 'Glass Hovercraft Of The Elven Wizards' - a song that had been performed on tour in Germany by his former band, The Chrysanthemums. The flip side was the sixth part of the "Yukio's Dream" series. As Stewart Mason writes on the All Music Guide: "The B-side of that single, 'Reservoir Girls (Yukio's Dream #6)', is an inspired oddity featuring Burrows recreating the opening scene of Quentin Tarantino's Reservoir Dogs in a variety of computer-altered voices, with some parts sung in an operatic voice to fragments of classical music, before swinging into a dead-on cover of Ray, Goodman & Brown's slick-'70s soul classic 'Girls'." Also included here is the unreleased version of "Girls" used as part of the 'B' side.

"Yukio Yung is the pseudonym of Terry Burrows, a London-based singer/songwriter/multi-instrumentalist with an apparently limitless appetite for both pseudonyms and side projects. Aside from his best-known alias, which he first used in the mid-'80s as one-third of the psych pop group the Chrysanthemums, Burrows released instrumental prog rock as Push-Button Pleasure, acid house dance mixes as YooKo, and free jazz-influenced pop art experiments as the Jung Analysts. To top it all off, Burrows released albums of avant-garde minimalism under his own name. All of this is in addition to his day job as a prolific author of computer manuals and music instruction books.

"Born in Ipswich, England, on January 18, 1963, Burrows taught himself guitar, bass, drums, and saxophone as a teenager, in addition to pursuing a classical education on piano that had begun at the age of five. Although influenced by punk, it was more the anti-record industry D.I.Y. ethos that attracted him than the music. Burrows' influences included Syd Barrett, the Kinks, the Who, and the entire Canterbury Scene with its prog rock sound that centered around the Soft Machine and its various offshoots, along with other '60s-influenced post-punks like XTC and the Television Personalities. By the mid-'80s, Burrows had started his own indie label, Hamster Records, releasing albums by his first band, the Jung Analysts, and similar non-commercial artists. A chance meeting with singer/guitarist Alan Jenkins, whose psych pop cult band Deep Freeze Mice had just broken up, led to the formation of the Chrysanthemums, for whom Burrows was lead singer and keyboardist between 1986 and 1991; the band name, like Burrows' newly adopted stage name of Yukio Yung, came about as part of his fascination with Japanese culture.

"Burrows released three albums and four EPs as co-leader of the Chrysanthemums before the band's original lineup splintered in 1991. Retaining the name Yukio Yung, he released his first solo album, Tree Climbing Goats, in 1992. A follow-up vinyl-only LP, Art Pop Stupidity, followed in 1993, with a CD of entirely new material, A Brainless Deconstruction of the Popular Song, appearing later that year. Jeff Lynne, a 7" tribute to one of Burrows' personal heroes recorded during the Art Pop Stupidity sessions, was released in 1994, followed by the single "Keep the Black Flag Flying."

"Burrows' next releases as Yukio Yung were a related pair of 10" EPs on the German Pink Lemon label, Goodbye Pork-Pie Brain and Hello Pulsing Vein. These discs found Burrows progressing in a more pop-friendly direction, although Goodbye Pork-Pie Brain did include the Can-like 15-minute drone-song "Yuri Gagarin." Four remixed songs from these EPs were released as the almost Brit-poppy CD EP (Mostly) Water. As Yung, Burrows also collaborated with R. Stevie Moore on the seven-song CD EP Objectivity in 1995, each covering one of the other's songs besides co-writing four others; the EP also includes Yung's lovely version of Robert Wyatt's "God Song." In 1996, Burrows rejoined with his ex-Chrysanthemums bandmate Martin Howells to form a new version of that group, re-christened with the cute visual pun Chrys&themums to differentiate it from the Jenkins lineup."